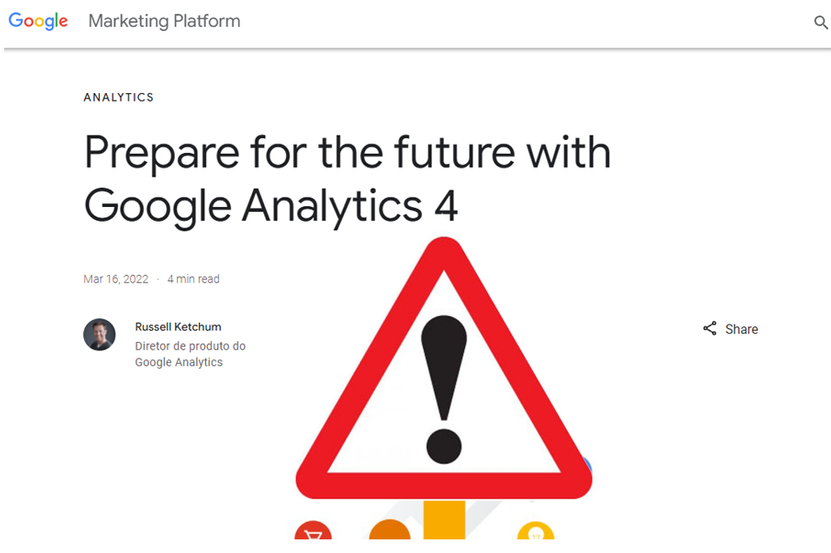 Google's Universal Analytics and Analytics 360 are on the way out. Google says the change is required to reflect greater privacy concerns and marketeers are going to just have to adapt.

Google Analytics isn't just any tool. For many, it's one of the single most useful tools in the online marketeer's box, and anyone in publishing with the slightest interest in the broader picture will know of its utility, even if it's not their specialisation.

So the announcement this week that widely-used versions of GA called Universal Analytics and UA360 are to be "sunset" and replaced completely with the most modern version, Google Analytics 4, has sent a ripple of trepidation through the entire userbase. Whole careers and businesses have been built on the back of Google Analytics, and so such a fundamental change to the ecosystem is bound to cause concern.

It's worth mentioning of course, that Google's dominance of search, advertising and virtually everything connected to the online world publishers inhabit means GA is also dominant, with few rivals. It's also worth noting that, as with many things Google, GA was originally an acquisition not an innovation. Although of course much about the application has been improved since, it's probable such an acquisition would get a tougher regulatory ride now. Privacy and cookies regulations have been a major driver for the reshape in how GA4 fundamentally works. Also, Google say, it is geared much more towards measuring concrete results and objectives within the interface than previous versions - equations and calculations you likely used GA data for to run your own calculations in spreadsheets or other systems.

In GA4, IP addresses are no longer logged. Such "solutions and controls are especially necessary in today’s international data privacy landscape, where users are increasingly expecting more privacy protections and control over their data" says Google.

In lieu of cookies, GA4 uses an event-based data model "to deliver user-centric measurement". It's also cross-platform - web, app, elsewhere. Indeed, the fact that UA was built for a desktop world is one of the justifications Google uses for its retirement, not without some cause.

GA4 will also feature country-level controls, enabling data collection to be calibrated for particular jurisdictions or market requirements. This has obviously been a concern for Google for some time, particularly in the light of court rulings such as happened in Austria at the start of this year.

What data Google itself would retain is unclear at the moment. GA4 will certainly offer easy integrations with Google's own products and businesses, such as  YouTube Engaged Views.

A clear concern for many is for legacy data, which persist in availability for "at least" six months after UA is retired in July 2023 and UA360 in October 2023. A different data structure is used for GA4, and so that legacy data can't be migrated directly: looks like an open door for middle services.

Many UA users are extremely unhappy about this, and for obvious reasons - such data is vital and informs business decisions going forward. Once again, Google flick their tail and cities are destroyed, so to speak.

While GA4 has been available since October 2020, most existing UA users have not switched over. Sentiment in the analytics sector is very much to do so now, so at least you have a year or so of data to work with before UA is turned off.