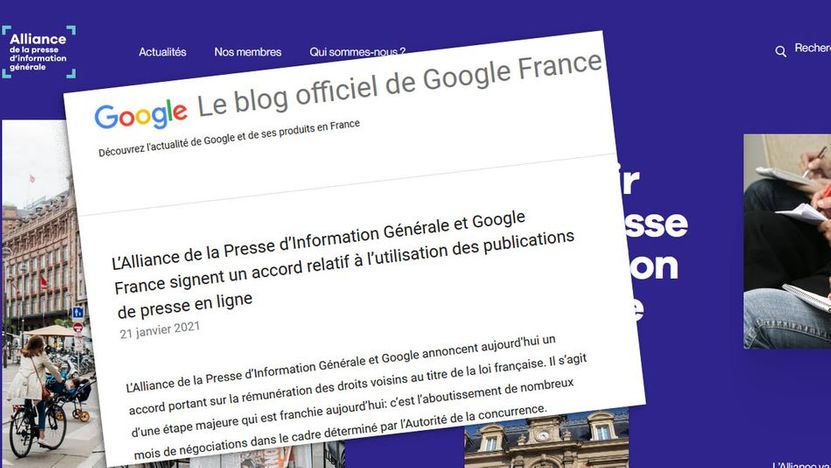 Google is to pay French media firms a slice of revenue earned from ads next to news search results, ending a long-running local dispute between the search giant and publishers.

Google is to pay French media firms a slice of revenue earned from ads next to news search results, ending a long-running local dispute between the search giant and publishers.

The agreement announced this morning (January 21, 2021) marks a significant milestone in Google's relationship with publishing firms in France - and will be of interest to media bodies globally.

The standoff between the two parties had reached the French courts, with the publishers fighting to receive what they say is fair compensation for the extra revenue Google gets from ads which have relevant content placed next to them.

Google's position was that extra site traffic to publisher sites generated from such searches was compensation enough. However the publishers pressed that ads next to good content were of such a higher value than untargeted ads, that their effort should be recognised with a share of revenue.

The deal creates a landscape where Google will negotiate individually with accredited French publishing companies - those which are members of the Alliance de Presse d'Information Generale (APIG), a body representing more than 300 French publishing titles.

The underlying legislation which has brought the two sides together is Article 15 of the EU Copyright Directive (March 2019), which applies the 'neghbouring rights' concept to news snippets and search engine results. Neighbouring rights is more commonly used for things like music being played on the radio leading to a payment to the artist, or royalties for performers when TV shows are rebroadcast.

Pierre Louette, APIG President, said: "After long months of negotiations, this agreement is an important milestone, which marks the effective recognition of the neighboring rights of press publishers and the beginning of their remuneration by digital platforms for the use of their online publications."

Google France's CEO Sébastien Missoffe said: "Today’s agreement with APIG is a major step forward. It confirms Google's commitment to compensate publishers appropriately under French law, and opens up new opportunities for our publisher partners. We are happy to contribute to the development of news publishers in the digital age, to further support journalism."

The French agreement comes shortly after Australian regulators underlined their commitment to create a similar cash-for-content bargaining agreement, which you can read more about in this artlcle on our site.

Google has made a blog post about the French media agreement here at this link.