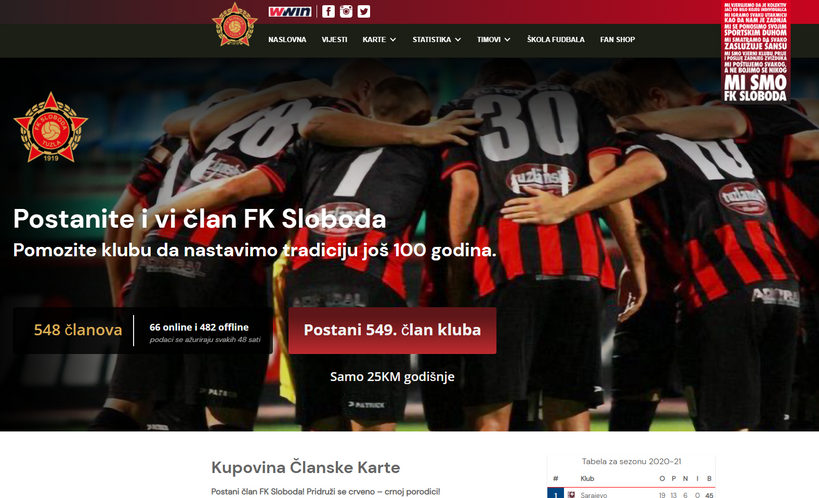 The club, based in Tuzla, north-east Bosnia, competes in the nation's top-flight and is targeting European competition after a change of ownership last year.

The team's new GPP-powered site has driven record increases in traffic and engagement with fans, and given the PR and comms team a cutting edge hub to post news, match reports, updates, and match and ticket deals at pace, and speak to social communities at the same time.

As with any sports-related site speed of response is vital, as well as elasticity to flex before, during, and after games as fans follow the club's fortunes intently. Glide's AWS cloud-native platform proved itself well able to satisfy all the business objectives of the club, as well as being a fast-working toolset for the reporting team and PR staff to utilise.

Glide's Rich Fairbairn said: "FK Sloboda celebrated its centenary recently and is part of the fabric of the city of Tuzla and top-level Bosnian sports full stop.

"It sits at the heart of the city's identity. The recent ownership change has reinforced its future and given an opportunity to refocus on critical things any modern sports organisation must achieve: communicate quickly and clearly with fans, keep news updates fresh and timely, and manage commercial operations and memberships.

"This is of special importance to us at Glide, as many of our technical team and AWS specialists are from the city and are supporters of the club, so you can imagine the vibe in the office when the prospect of using their expertise to help their home team became apparent!"