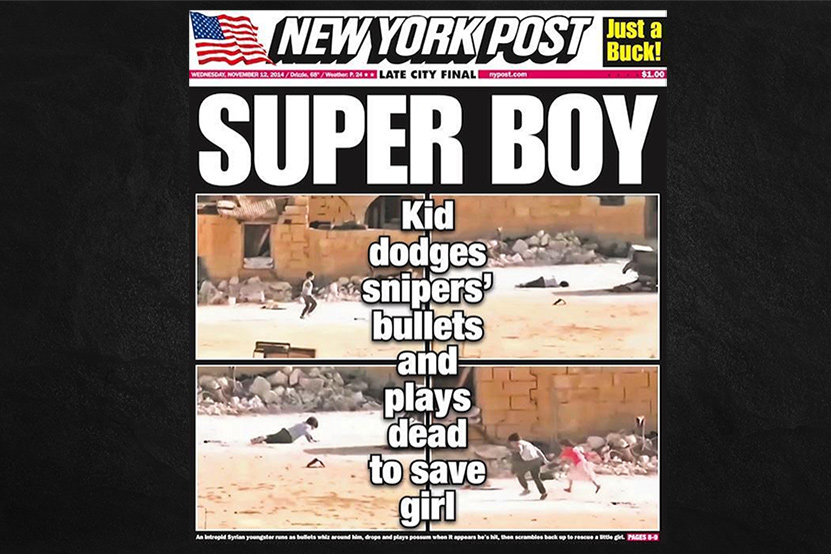 Truth, it has been observed, is the first casualty of war. Newsrooms across the world are currently having to make rapid decisions on the veracity of the images, videos, social media posts and frontline reports received. Just how challenging is it?

Discerning fact from fiction for journalists is tricky in times of peace, especially in an era when the phrase "fake news" has been mobilised to dismiss things patently true. However, we are now seeing conflict involving the world power that some say wrote the rulebook on deceiving foes and its own population alike, and perhaps more than ever journalists have an especially tough job.

I was once personally fooled by some footage, purporting to show children under fire in Syria. It took some time for the penny to drop that it wasn't what it was claimed to be, and that only after reading some sceptical comments. As the realisation dawned on me that I'd been misled, my main thought was "why would you do that?". The New York Post, among others, fell for the video.

Subsequently, the Norwegians behind the fake footage came forward and apologised . Rightly so - real children were being killed and the Syrian government (with Russian assistance) was spinning hard that any reported civilian casualties were either untrue, faked, or committed by the rebels, or all three, as taught by disinformation gurus in Moscow. Such faked footage only assisted them. Interestingly, while the 'original fake' was taken down by its creators, the footage is still there on YouTube, mocking somewhat the platform's commitment to truth.

On the other side of the equation, I recall a boss asking why a story (edited by me) on the death of Osama Bin Laden didn't include the detail - used by some other outlets - that he'd cowered behind one of his wives as the US SEAL Team fired at him. "Because there's nothing in what American officials have said to suggest he did.", since supported by the majority of SEALs who participated in the raid. A reprehensible piece of humanity he may have been (Bin Laden, not my boss), but the public wanted him to be a coward and so some journalists fed them that.

In the current situation in Ukraine, journalists need to be especially careful. Every war is subject to propaganda and, as mentioned above, a state level actor which mass-produces multiple versions of information via deniable channels, and sees which ones stick - true or not - is a challenging complication to the search for actual truth.

Equally however, journalists are people. And people do lap up propaganda, or want the story to be a certain way, or bias for facts that reinforce a hope or belief. It's human. We now know the events of Snake Island are not as initially described, although the central plank of what happened - a handful of Ukrainian soldiers telling a full-on Russian warship to f-off - remains true and their bravery should not be besmirched. Similarly, the "Ghost of Kiev" fighter pilot said to have shot down six Russian combat aircraft remains an unverified yarn at present. Maybe we need such yarns in dark times, and no-one would blame the Ukrainians needing it more than most.

It's worth remembering what Times editor John Witherow recently observed about reporting in the 1982 Falklands conflict. Many journalists, himself included, believed it was their duty to be impartial. The famous Max Hastings did no such thing, Witherow observed, and it was Hastings' reporting that found great favour with the broader British public who mostly shared his view that it was a battle between right and wrong.

And right and wrong are once again a reality.

How are your spider senses for true and not-so-true (or utter tripe)? If you want to see how news you think you knew is being counterspun elsewhere, the work of this man is invaluable. We'd also recommend reading this and this from MIT/bellingcat, to arm yourself better for news verification amid questionable motives.