Reuters Digital News Report: if it quacks like a duck 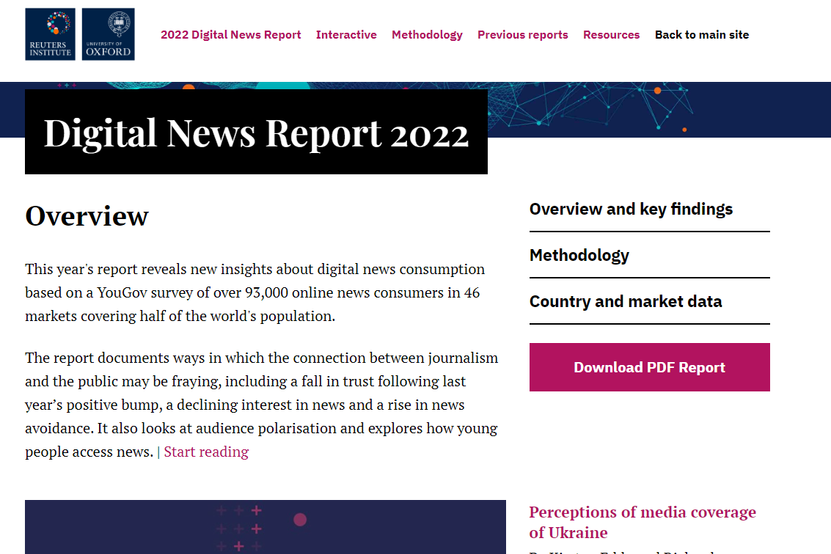 A rather downbeat annual summary from Reuters is actually good news - there's nothing surprising in it.

At the mighty creature called The Sunday Times in London, a former place of work for me, there was and still is what was called a, err... "Sunday Times story". It's impossible to put one's finger on what exactly made it a Sunday Times story - but you knew when you saw it, and you knew it if you were involved in creating it.

One of the styles of story that fitted into this category was the "counter-intuitive" news piece: in the self-generated story world of the weekly newspaper, you approached a subject thought to be well-known and assumed to be true, would scout in it and around it extensively and, sometimes, you'd discover something which undermined or actually refuted the original belief: a dissenting expert, a revelatory piece of data hidden from view, a revealing statement, or some conduct that went contrary to the thing believed.

Like the best news stories confirming to a rough formula, such pieces are impossible to define perfectly, but you'd know it when you found one.

There's none of this kind of contra-insight in the Reuters Digital News Report 2022. This is no criticism of the authors of course, they can only draw their conclusions from the data they have in front of them. That data is saying predictable things, particularly for our own UK market.

So it falls to us to try and yield a counter-intuitive conclusion from the report and here it is: It could be that the unsurprising conclusions of the report are good news for the publishing industry as a whole.

If it is how it looks, at least you know what you're working with.

As the conclusion for the UK segment of the report puts it that "news consumption and trust have dipped over the last year", and nearly half of respondents said they avoid the news "sometimes or often".

Given the events of the last few years, and even more so the last few months, this is probably both predictable and understandable.

People have consumed news media heavily over the course of the COVID crisis, wanting the most accurate information to enable an assessment of the risks involved. Despite the tremendous furore over "fake news", most people went about gathering information diligently and using trusted sources. I'd even argue that we saw generally increased media literacy over the course of the COVID situation.

Now of course, people are fatigued, and the situation in Ukraine combining with other household pressures is only adding to that fatigue. It's entirely understandable people want a break from the constant flow of information. A flow of information incidentally, that humans are still working out how to deal with. It took three days for the victory at Waterloo to be reported to London: in our age, an important national story can have a shorter complete news cycle than that.

News will recover in 2023 no doubt, and in the meantime, there's a lot of other different types of content that people do want to engage with. Subscription growth may be a different story for a time, but again, that is because of global economic circumstances.

The section of the report that deals with the polarisation of chosen news sources says "we have described how, perhaps contrary to expectations, news audience polarisation is often relatively low".

With all due respect, it's only surprising if one was to use the political extremes to orientate oneself. Most people are reasonable because most people are complex if you talk to them, and most people don't have strong opinions on every subject for the simple reason that they don't need to.

The report also concludes that the young "social native" audience in the 18-24 bracket is much less "loyal" to any particular news brand and has a much greater user of visual platforms such as TikTok.

Again, no surprise. Whether this indicates a true separation from the generation before them is an interesting topic. If a sample 21-year-old isn't (understandably at that age) fully committed to The Telegraph's worldview and spends more time on TikTok - then are they actually loyal to TikTok, given that TikTok itself stands for nothing to be loyal to? Time will tell.

The main thing the industry can take from the report is that the future is in our hands, which, unlike the report, I find extremely exciting.